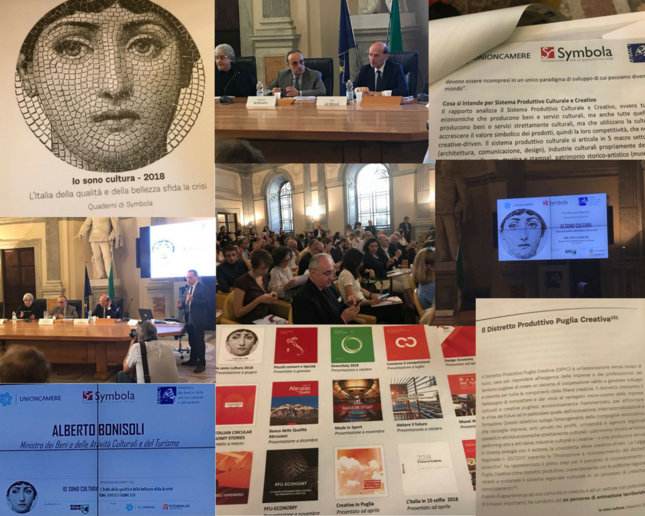 Presented in Rome, with the participation of the new Minister Alberto Bonisoli, the report "Io sono cultura 2018 - Italy of quality and beauty challenges the crisis" drawn up by Symbola Foundation and Unioncamere. A picture of the production system founded not only on cultural production and historical heritage but also on the typical Italian ability to transmit culture and beauty into production.

"The cultural and creative industry, declares Minister Alberto Bonisoli, will become one of the protagonists of the economy in 21st century and in this field Italy has a competitive advantage due to its extraordinary historical, artistic, archaeological heritage of which we have to do a complete use: fashion, design, cinema draw inspiration from this heritage, while new technologies, virtual reality and augmented reality find concrete application in its enhancement. Tourism and Made in Italy receive enormous benefits from the desire of Italy that is possible to breath around the world and that it is our duty to promote as much as possible.  Growth, well-being and culture must be included in a unique paradigm of development of which we can become a model in the world ".

"Culture and creativity are the keystone in all the productive sectors of an Italy that makes Italy," commented Ermete Realacci, president of the Symbola Foundation. According to a survey by US News magazine and the University of Pennsylvania Italy results to be the first country in the world for cultural influence”.

“On average, those who work in the field of cultural and creative professions have a higher level of education - says Ivan Lo Bello, president of Unioncamere. Focusing on culture and creativity means, therefore, aiming high, on competences able to face the challenge of industry 4.0 ".

Puglia Creativa has been identified among the drivers of development highlighted by the relationship as capable of generating value at a territorial and sectoral level, Puglia Creativa is identified. An important recognition of the Creative Cluster’s  ability to weave a territorial network of micro-enterprises in the sector, to consolidate the system and to create the conditions to face the challenges of innovation, internationalization and training.

Report data: How much is the cultural and creative productive system in Italy?

A system that is growing and that is capable of generating 6% of the national wealth, over 92 billion euro, with a 2% increase over the previous year and a multiplier effect on the rest of the economy: for every euro produced in culture, 1.8 are activated in other sectors.

A system that gives employment to 6.1% of the employed, with a rate of growth of 1.6% - higher than the dynamics of the economy which stops at 1.1%.
With the performing arts sector that is dragging both in terms of growth of added value produced (+ 9.5%) and in terms of employment (+ 8.7%)

What about Apulia? The economy of the Apulian culture is also growing

The Apulian culture and creativity generate € 2.75 billion a year, equal to 4.2% of the entire regional economy, with a 4% of growth compared to the previous year, a double rate compared to the national average. The sector employs 60.000 workers, equal to 4.3% of the total regional economy, registering an increase of 3.7% - more than double of the national average rate.
Even more interesting are the performances related with visitors and revenues in museums and archaeological areas: Apulia with its rate of growth of + 19.5% is second only to Liguria + 26%.
Another positive result is the impact of the cultural and creative production system on tourism spending: Lecce is among the top 20 provinces, ranking in 17th place with a performance of over 439 million euro.
This encouraging data confirm how the strategy and the efforts of Puglia Creativa Cluster, aimed at creating the conditions for the development and consolidation of Apulian companies, are going into the right direction.

All news
Back to top